Summer is Right Around the Corner

When you meet Jay Raffaldini, it doesn’t take long to recognize he’s passionate about what he believes in — his business, community and the North Carolina wine industry. He brings the same energy and enthusiasm to each. Why wouldn’t he? He believes they’re all linked.

Chances are, when you first encounter Raffaldini, he’ll have a glass of wine in his hand, and he’ll explain how he ended up in North Carolina.

In January 2000 on his 40th birthday, Raffaldini brought his interest in winemaking for personal use to North Carolina. “My family has a history of winemaking in Italy,” Raffaldini explained. “I wanted to find a place where I could bring that family heritage to the U.S. It was part of my retirement plan – be the gentleman wine-maker.”

As he does with everything, Raffaldini did his due diligence. He found the Yadkin River Valley in North Carolina was one of the best locations in the country to establish vineyards for grapes that could produce fine Italian-style wines. Raffaldini found his ideal spot in the Swan Creek area of the Yadkin Valley and started with 12 acres.

At first, Raffaldini planned for his winemaking venture to be small, catering to family, friends and local wine enthusiasts. After all, he had his hands full with a successful career on Wall Street, having led several investment firms since the late 1980s. But, his personality and philosophy led him to focus on making this venture the best – even if that meant changing his plan.

“I believe once you commit to something, you should be all in,” Raffaldini said. “The same approach I took to making my firms successful on Wall Street, I applied to Raffaldini Vineyards and Winery: focus, passion and the willingness to risk it all. You have to be willing to risk it all to be great. I’ve seen it throughout my career. I’m glad to say it has transformed Raffaldini Vineyards and Winery to be a much larger enterprise than I had imagined. But, it looks like I can’t really describe it as my retirement any more!”

Raffaldini comes from a family that has been willing to risk it all. His father, Lino Raffaldini, immigrated to the United States from Italy in 1952, where he met and married Theresa Di Renzo, a first generation Italian-American. Raffaldini’s father came to the United States with just the drive to succeed and desire to capture the American dream, which he did. He became the chairman of the board and chief executive officer of a New York Stock Exchange company, the first Italian born to do so.

“My father taught me so much about how to live and succeed,” Raffaldini said. “Have passion for what you do. Respect those who give 100 percent to their jobs and do them well – no matter their job. Have the courage to take risks. Support the family and the community. In fact, it’s my father’s signature you see on each bottle of Raffaldini wine. He epitomized the Raffaldini family motto: Audentes Fortuna Iuvat, or ‘Fortune Favors the Daring.’”

Well, it’s clear the grape doesn’t fall far from the vine, as Raffaldini has expanded his investment into Raffaldini Vineyards and Winery several-fold since the early 2000s. “As my father knew, you can’t succeed without taking risks,” he said. “I took a risk investing in a vineyard, but it didn’t stop there. I’ve yanked out the vines three times over the years. We had the wrong grapes, and then we had the wrong clone of the grapes. No matter the issue, I’m committed to making sure it’s right. I embrace the risk because opportunity comes from risk. Same as on Wall Street – no risk, no reward.”

And, as you might expect, Raffaldini’s thriving winery now produces approximately 80,000 bottles a year from the vineyard of more than 40 acres and his wine was presented by the White House as a presidential gift to the president of Italy on his birthday in 2008. The 2011 Raffaldini Sangiovese earned a 90 rating/Editor’s Choice by Wine Enthusiast. But Raffaldini believes his vineyard’s success is just the beginning. North Carolina, the Yadkinville River region and the vineyards and wineries that surround Raffaldini in the Swan Creek area are part of his plan for expansion.

The Whole is Greater Than the Parts

Reflecting on his belief that what is good for his community fuels success, Raffaldini enthusiastically supports new wineries – especially those nearby. “For North Carolina in general, and the Yadkin River Valley area more specifically, to capture our growth potential, we have to build enough industry presence to support infrastructure, like local wine education programs to produce local employees, and secondary businesses, like restaurants and hotels,” Raffaldini explained. “I want us to be a destination for wine enthusiasts as well as novices. So, yes, I view new wineries and vineyards focused on fine wines as a real benefit for us and the area.”

So, how does Raffaldini expect to build a following and cultivate his business as well as that of the region? “We’re focused on fine wines,” he said. “Raffaldini specifically produces Italian-style fine wines, using Appassimento, our traditional method of drying grapes and fermentation. The process produces full-bodied whites and big, structured reds. That’s the product our brand stands for, and we’ll be relentless in producing the best version of these wines. That’s another lesson I learned over the years about being the best – you must be relentless, driven.”

Planning For the Future

Raffaldini believes in planning, but he also believes you have to take advantage of opportunities as they present themselves. “I believe we have a tremendous opportunity to make Raffaldini Vineyards and North Carolina fine wines a huge success,” he said. “We’re on the cusp of explosive growth. We’ve worked hard to make the progress we have, and we’ve gained a great deal of momentum. Yet, I also believe you can’t know exactly what the future holds, so you have to look out for and take advantage of what unfolds. That’s a lesson for folks in any business: You need focus, passion, commitment and courage – but don’t forget to be a jellyfish!”

Jellyfish or not, it’s hard to beat a future that includes sitting at the Raffaldini villa, looking out over the 180-degree view of the North Carolina mountains with a just-opened bottle of Raffaldini Grande Riserva. Likely as not, Jay Raffaldini will gladly join you, explain why the label features a bumblebee and tell you: “Follow your heart, take the risk and enjoy the journey! 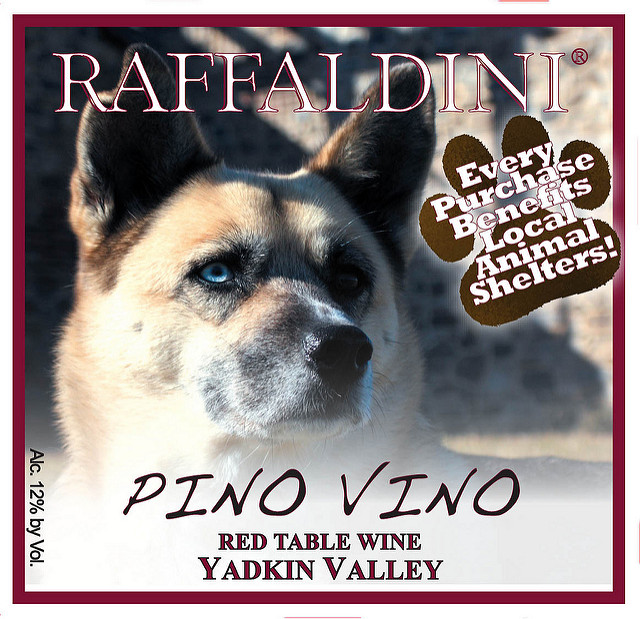 For the last decade Raffaldini Vineyards has officially supported local animal rescue organizations by donating proceeds from the sale of each of its Pino Vino wine releases. The first label featured Pinot, who Jay and Maureen Raffaldini rescued from a kill shelter when she was 1 ½ years old. Over the following eight years the photos of different rescued pets have graced our labels. Each one, along with the hundreds of submissions we received had a moving story and illustrated the love and dedication so many of you have for helping abandoned and abused animals. We thank you for your continued support and have been honored to host these yearly releases. On this 10th year we will once again feature a dog rescued by the Raffaldini family on the label of Pino Vino X. Pino Vino X will also be present for lots of pets and kisses.


Please join us on June 16, 2018 for a fun filled family afternoon when we release Pino Vino X.

Spring is Here! Enjoy Chianti in the Carolinas

The wine is a collaboration among longtime friends, JW Ray and Jay Raffaldini. Both men are dedicated to producing higher quality wines and serve as passionate advocates for the growth potential of the Yadkin Valley wine region.

"My great friend JW is a quintessential winemaker of unsurpassed skill, Owner Jay Raffaldini, said. “I’m excited to once again create a wine that represents our shared passion and the many years of dedication to our craft.”

This year's RARA Sisboombah was produced by blending JOLO's 2016 Crimson Creek “Reserve” with the 2016 Raffaldini Montepulciano Riserva. The inaugural offering sold out in less than three days.

"My reverence for Jay for bringing old world wine techniques to this region to massage the European varietal characteristics out of North Carolina grapes cannot be overstated." JOLO founder JW Ray said. "The entire Raffaldini team continues to raise the bar for all of us. Jay is a true visionary and an inspiration. I’m very fortunate to call him a great friend. I couldn’t be more excited about this 2nd bottling of this world-class wine."

Raffaldini and Ray will co-host two gatherings on Saturday, March 10th, where they will share their winemaking stories over light refreshments. The first event will take place at Raffaldini Vineyards beginning at noon. Reservations can be made by clicking here. The second gathering will begin at approximately 2:30 p.m. at JOLO Winery & Vineyards.  This event is open to the public.

A very limited number of bottles will be available for sale at JOLO and Raffaldini Vineyards while supplies last. Bottles are priced at $40.

About JOLO Winery & Vineyards
JOLO Winery & Vineyards is an award-winning, family-owned, boutique winery in the picturesque Yadkin Valley AVA in Pilot Mountain. We produce extraordinary wines that reflect the terroir, including the 2016 Pilot Fog, a recent platinum medal award winner at the 2018 International Winemaker Challenge Wine Competition. JOLO is open for wine tastings most Thursdays through Sundays and we pour at many local wine tasting events throughout the year. Wines are available for purchase at the winery, on the website, and at selected retail locations.